Sussex Singers, from Sussex Elementary School, Baltimore, Maryland, was one of the recipients of a 21st Century Instructional Initiative Grants awarded to elementary, middle and high schools in Baltimore County this year by The Education Foundation of Baltimore County Public Schools and when an invitation was received by the Foundation’s Headquarters, it was an immediate acceptance to attend the December’s concert. 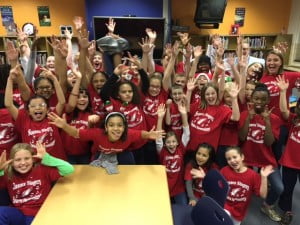 Finding out about the Sussex Singers

The Sussex Singers is an after-school program open to all fourth and fifth graders at Sussex Elementary. It is composed of two groups: the Sussex Singers (focusing on melodies) and the Sussex Harmonizers (focusing on harmonies). The groups meet on alternating weeks and practice singing popular songs that are voted on by the students. They perform both at a school concert and a night parent concert. This project began in February 2015, and is in the middle of its second season in fall 2015, with a hopeful third season in the winter and spring of 2016. However, the school has had some difficulty to sustain and maintain the quality of the program without funding. Funding, through the foundation, would allow the project to move from a “just-for-fun” activity to a learning-based opportunity of much higher quality. It would also give students the opportunity to perform outside of the school setting. 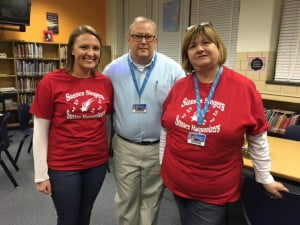 This project addresses the 21st Century theme of Arts & Culture, allowing students to learn more about the art of singing and performing in a way that goes far beyond the traditional elementary school music curriculum. Arts and culture are not always valued as much as they used to be, and this program will help fulfill that crucial need for creativity and artistic expression. Sussex Elementary School principal, Mr. Bowser, stated that, “Students need to be exposed to arts and culture in order to broaden their horizons and live a full and robust life.”  This quote just might have been one of the many in the grant proposal that solidified the scoring of the grant by the judges and the Foundation’s Program and Review Committee

Families filled the auditorium on December 9th with cameras on hand to snap that special photo of the Sussex Singers.  The students filled the stage wearing brightly colored red Sussex Singers t-shirts, acknowledging the Education Foundation as part of the grant expenses.  Students sang their favorite holiday songs led by their teacher, Ashley Battersby.  Capture the faces of the students, teachers and proud principal, Mr. Tom Bowser, in the photo gallery below.

Congratulations to everyone at Sussex Elementary Schools for their magnificent harmony and beautiful melody.  This program has given students pride in their schools, self-confidence, and drive to succeed. 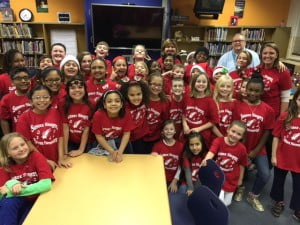