(Towson, MD—October 8, 2013) The Education Foundation of Baltimore County Public Schools, Inc. has partnered with Barnes & Noble Booksellers to host a book fair at three locations: Pikesville, Towson and White Marsh. The book fairs will be held on Monday, October 14, 2013, from 6 p.m. to 10 p.m. 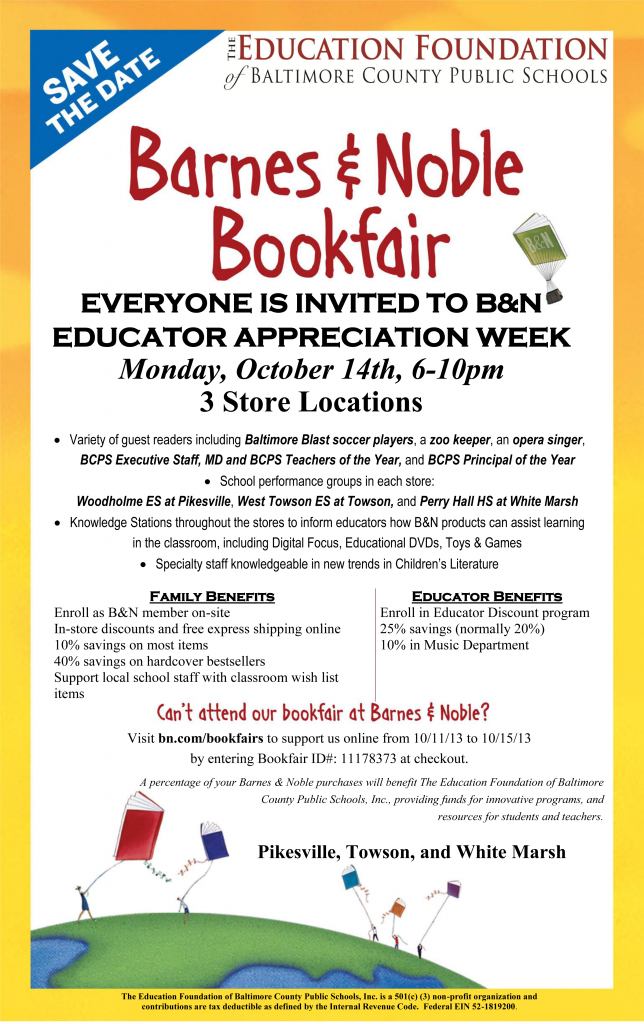 A portion of all sales (up to 12 percent) from that evening, as well as online purchasing throughout the week of October 11-15, 2013, will support Baltimore County Public Schools systemic initiatives, scholarships and school-based projects such as, but not limited to, instructional initiative grants that are sponsored annually by the Foundation. The Foundation’s Bookfair ID for the event, #11178373, should be provided to the cashier at checkout in the store or entered in the designated area for online purchases at www.bn.com/bookfairs.

“Hosting book fairs at three locations across Baltimore County promises to be a great success, and it allows the public to see our excellent teachers, students, administrators and other prominent guests,” says Deborah Phelps, Director of the Foundation. “We are very grateful for this partnership with Barnes & Noble.”

Flyers for the event and purchase vouchers are available below: